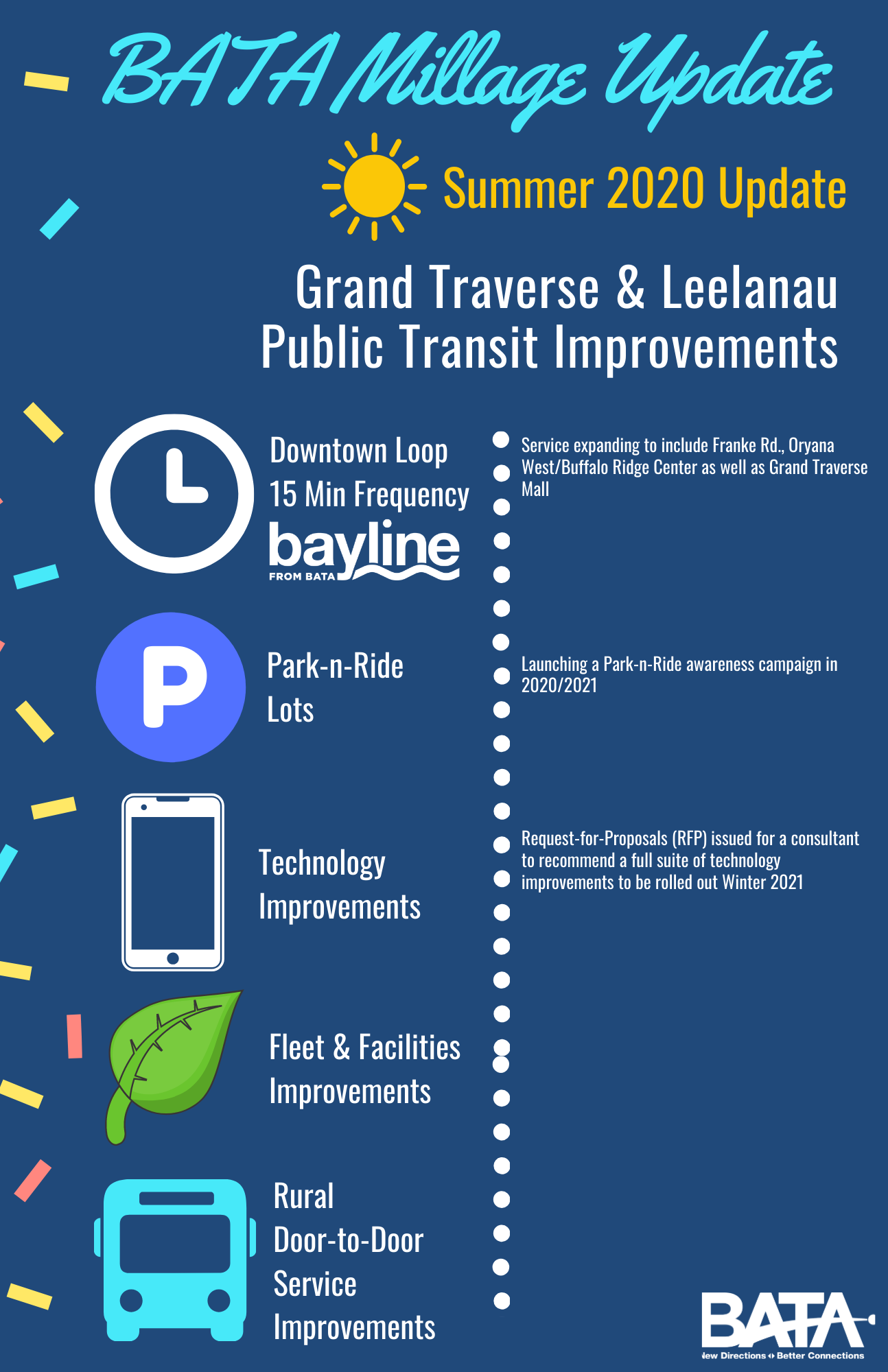 Technology Improvements: Request-for-proposals (RFP) issued for a consultant to recommend a full suite of technology improvements to be rolled out Winter 2021. 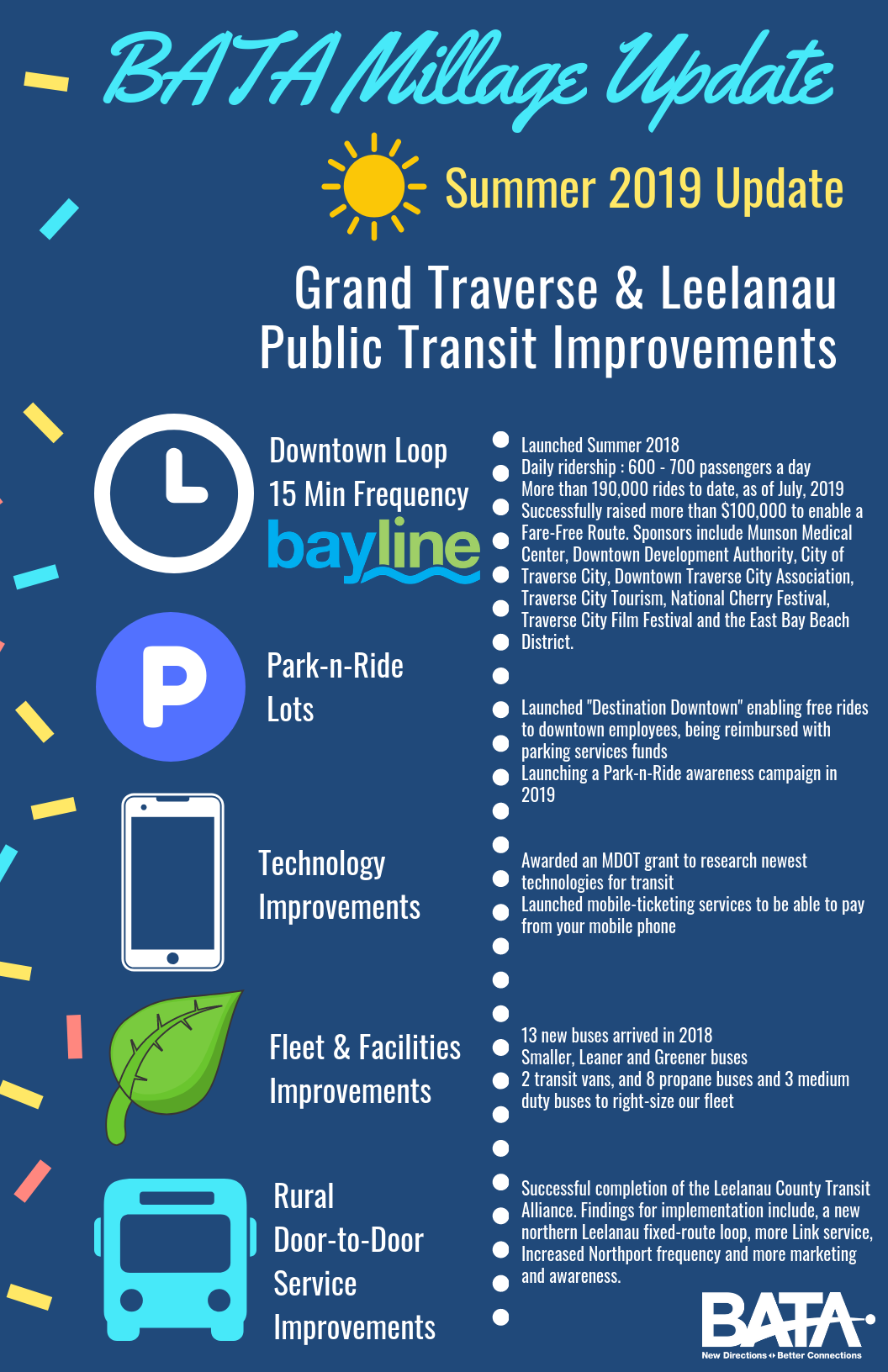 Technology Improvements: Awarded an MDOT grand to research newest technologies for transit. Launched mobile-ticketing services to be able to pay from your mobile phone.

Technology Improvements: Awarded an MDOT grand to research newest technologies for transit. Launched mobile-ticketing services to be able to pay from your mobile phone. 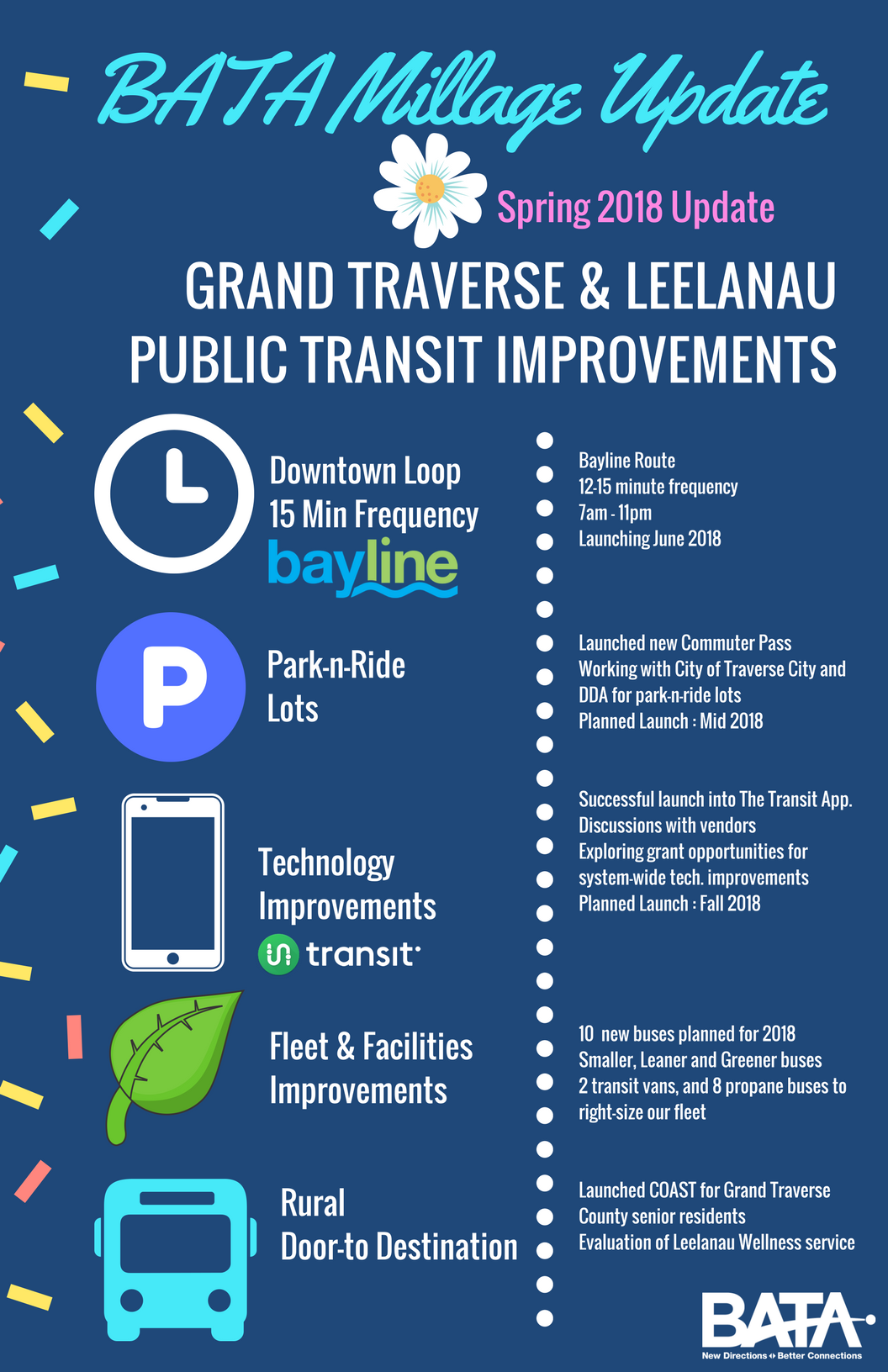 What is the millage proposal request?

What will be the annual cost to the homeowner?

Is the 0.5 mill millage rate request a renewal or an increase?

This is an increase from BATA’s current millage rate of .3447 that expires on Dec. 31, 2017. BATA hasn’t requested a millage increase in more than 14 years.

What will happen if BATA’s millage request fails?

If the millage isn’t approved BATA will lose 35% of its funding and will therefore need to reduce services accordingly.

How does BATA’s 0.5 mill request compare to other local and transit millage rates in the region?

What does BATA hope to provide if the millage is approved?

The goal of the millage is to allow BATA to sustain operations and grow its current level of service by providing funds to add services requested by the community, replace its aging fleet, maintain facilities, and make shelter and stop improvements. A recent Community Needs Assessment identified the following needs:

How much will the millage raise in the first year?

The millage will raise an additional $1.1 million in revenue per year, which results in $3.55 million in annual property tax revenue for BATA collected from Leelanau and Grand Traverse County residents.

Will property tax capturing entities such as DDAs and Brownfield Authorities receive a portion of BATA’s millage?

How is BATA funded?

BATA operates on a $7.4 million annual budget and receives its funding from these sources: Federal Government (18%), State Government (38%) and 44% from local sources, of which 35% is provided by the local millage levy. Capital purchases such as buses and new technologies have traditionally been funded through grants, but state and federal transportation grants aren’t as widely available as they once were.

Why can’t BATA do more with the funds it currently receives?

BATA is operating at its maximum service capacity and can’t maintain its current service level without an increase in local revenue. Increased funds are needed to maintain current service levels and adequately fund ongoing capital needs such as fleet replacements and new technologies as well as the operation of any new services in response to community needs.

How many rides does BATA provide?

BATA provides nearly 1,500 rides a day and averages nearly 500,000 rides a year and climbing. BATA has seen a 6% increase in ridership in the past year on its City Loop fixed route services alone.  More than 177,000 rides annually are provided to seniors or disabled riders.

How many people work at BATA?

How many buses are in BATA’s fleet?

BATA has more than 60 vehicles in its fleet ranging from small conversion vans to large passenger buses to handle a variety of transportation needs. More than 90% of BATA’s fleet are equipped with wheelchair lifts and bike racks. BATA has recently begun replacing its aging fleet with propane powered buses that save on maintenance costs and are better for the environment with lower greenhouse and carbon monoxide emissions compared to gasoline and diesel vehicles.

Who is responsible for BATA’s oversight?

BATA was established in 1985 and is a legal authority formed under ACT 196 of Michigan Law. It is overseen by a seven-member Board of Directors with representatives from both Grand Traverse and Leelanau Counties.

Why does BATA have empty buses driving around town?

BATA’s ridership varies throughout the day, similar to traffic on area roadways. Not all of BATA’s buses are filled to capacity consistently, however BATA s provides 1,500 rides daily; totaling half a million trips per year.  BATA’s service model is divided into two types of service, on-demand LINK service and fixed-route LOOP service. While BATA’s LINK service may only have 2-4 passengers on board at a time, the LOOP service is often near capacity.  BATA believes the best way to serve the public is through reliable, consistent and comprehensive coverage for Leelanau and Grand Traverse counties.

Get on the road to success & join Team BATA today!

Plan your day with an easy to read timetable of stop locations for your route.